My wife and I have both read The Auschwitz Escape and found it thrilling, informational, and fearsome in a good way. 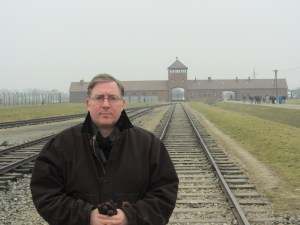 (Jerusalem, Israel) — Yesterday, Israelis solemnly marked “Yom HaShoah,” the annual day in which we pause to remember the six million Jews exterminated during the Holocaust. At 10am, all over the country, air raid sirens wail for two straight minutes. All traffic stops. All commerce halts. Everyone stands at attention and remembers what was, and what could be again one day if we do not remain vigilant against the forces of evil.

This morning, I’ve decided to re-post a column I wrote several years ago, explaining how I came to write my only work of historical fiction as my way of helping inspire more people to learn about the Holocaust. I hope you’ll take a few minutes to read the column, and share it with your children, and with other family and friends.

“The wicked flee when no man pursueth: but the righteous are bold as a lion.  For the transgression of a land many are the princes thereof: but by a man of understanding and knowledge the state shall be prolonged.
A poor man that oppresseth the poor is like a sweeping rain which leaveth no food.
They that forsake the law praise the wicked: but such as keep the law contend with them.
Evil men understand not judgment: but they that seek the LORD understand all.
Better is the poor that walketh in his uprightness, than he that is perverse in his ways, though he be rich.
Whoso keepeth the law is a wise son: but he that is a companion of riotous men shameth his father.”  Proverbs 28:1-7  (KJB)

Verses 1a, 4, 12, 15, 28 –   A look at the wicked.   The wicked are those who refuse to recognize the way of God, His Word, and refuse to submit themselves to Him; whether rich, or poor.  1.) The wicked see a conspiracy behind everything that is against them, and flee.  2.) For anyone to turn their backs on righteous laws is to give praise to the wicked who break those laws.  3.)  When the wicked rule and are in leadership people tend to hide.  4.)  Wicked rulers among poor people are as devastating as an angry growling lion (Job 24:4;  Prov. 19:12;  1 Peter 5:8).

Verses 2, 5, 8-9, 11, 16-17, 21-22, 25-26 –  A look at the wicked who are wealthy; leadership, rulers.  1.)  Many rulers, maybe “Big government” is a result of a wicked nation.  2.)  True justice is not understood by the unjust; and that goes along with exorbitant interest, profits, low wages, etc..  3.)  The unjust will be “cruel oppressors”, and will most likely have “blood on their hands” thus face eternal judgment.  4.)  Greed, partiality, will ultimately bring poverty into the lives of those who practice it – ultimate destruction.

Verses 3, 10a, 13, 24 –  The wicked poor.  1.)  You would think a poor man would be more understanding of the poor; but the wicked poor will stoop to the lowest degree in order to improve their own situation in life.  2.)  Destruction awaits those who would lead an upright individual astray – take Balaam as an example (Numbers 31:8, 16).  3.)  It is the tendency of all wicked people to cover their transgressions, and even refuse to believe they have transgressed (v. 24).